In 1960, Albertan adventurer William McGregor climbed to the summit of Whistlers Mountain, Jasper. Inspired by the incredible views, McGregor dreamed of sharing his experience with the rest of the world.

Construction of the SkyTram began in 1963, with many key components being imported from Germany. The project was finished in time for the grand opening in the summer of 1964.

Since opening, over 6 million visitors have ridden the Jasper SkyTram and experienced the same breathtaking Rocky Mountain views that first inspired McGregor over half a century ago.

The Amazing Race Canada premiered its fourth season on June 28th, 2016 with 10 teams from all over Canada racing across the country and the world for a shot at the grand prize, which includes $250,000 cash. Some of the teams featured this year include former Big Brother Canada stars Jillian and Emmett, Ashley Callingbull, the first Canadian and first, First Nations woman to win the title of Mrs. Universe, and Rita & Yvette Yakibonge, twins from Edmonton. Alberta.

The awe-inspiring Rocky Mountain landscape of Jasper National Park was a picturesque backdrop for the first leg of the race and provided the perfect mix of natural and man-made obstacles for the show's multiple challenges.

There was much review with various engineers and stunt coordinators to ensure the safety of all involved including the mechanics of the tram itself. Throughout the design of the stunt, there were many alterations as it was an extremely difficult challenge. To be successful, you had to have the nerve and focus as well as upper body strength to not only maneuver your way across the monkey bars but to also transition from being underneath to making your way back up the other side.

As a public aerial tramway, this was a first for us and will remain one for the books!

Watch the first episode of The Amazing Race Canada  Season 4. 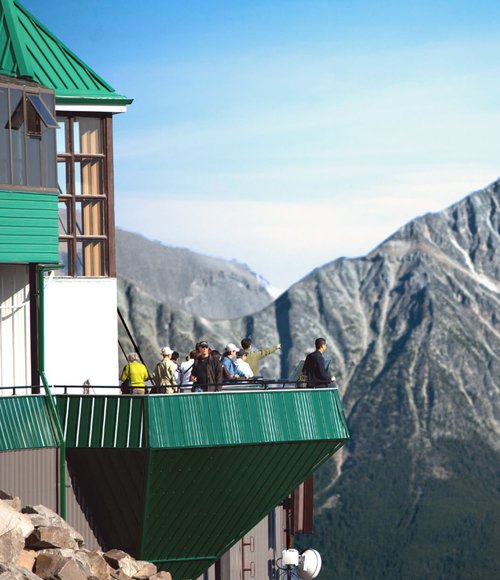 Learn more about how the tram works.